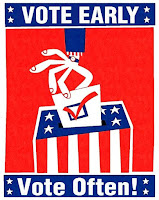 Once again, it's "Super Tuesday" in the USA. The day upon which a number of States have their presidential primaries or caucuses. In an ideal world (if you are hoping that "your" party will win the November election) - the nomination will be sown up on, or by this day. Of course this hasn't happened for the Republicans this year.

The States where the action will be are -

The important thing to remember is that each state has different rules. Some are open, others are only for registered Republican voters. The results are binding in all of today's caucuses - though some earlier ones (such as last Saturday's caucus in Washington State), are non-binding. In some states the delegates will be allocated proportionally to the number of votes cast, while in certain circumstances - it changes to 'winner take all'. In some States not all candidates have been able to get on the ballot paper (Virginia only has Romney and Paul - the VA rules can be found here.). It's an evening for either sitting there with the detailed rules for each state Republican party - or letting the experts explain who gets what. (Even then the experts can differ - which explains why different websites have different figures for the numbers of delegates won by each candidate).
Posted by J David Morgan at 05:30