The Passage of Power 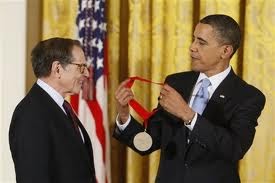 Friends of mine know how much I value Robert Caro's work on Lyndon Johnson - if you see my facebook page you'll see I list it as one of my favourite (set of ) book(s). Which is why I was so excited to see this in the daily email sent by Politico.

THE NEW YORKER PREVIEWS CARO'S FOURTH LBJ VOLUME - "[I]n '[Annals of History:] The Transition," the historian Robert A. Caro takes readers through the dramatic events of the day of John F. Kennedy's assassination, from the point of view of the future President Lyndon B. Johnson. In this excerpt from the much anticipated fourth volume in Caro's lauded series about President Johnson, 'The Passage of Power' [out May 1], Caro presents a portrait of a man on the verge of transition ... [T]he day began for Johnson with the belief-the fear-that he might not be on the ticket with J.F.K. in the coming election. That very day, back in Washington, a witness was providing Senate Rules Committee staffers with evidence that he said linked Johnson to Robert G. (Bobby) Baker, the subject of a scandal that had been exploding in the capital, and ... Life magazine was mapping out an investigation into the sources of Johnson's wealth. The Vice-President's trip to Texas wasn't going well: he had failed to heal the bitter rift between two major Texas democrats, Governor John B. Connally and Senator Ralph Yarborough; the previous day, in San Antonio, Yarborough had refused even to ride in the same car with Johnson. 'Given what the President was seeing for himself in Texas-that Johnson was no longer a viable mediator between factions of his party in his home state-and what was happening at that very minute in the Old Senate Office Building, the President's assurances that he would be on the ticket might start to have a hollow ring,' Caro writes.

"Johnson himself, Caro writes, believed that his political career was 'finished.' Caro details the moments after the shots were fired-Johnson being flung to the floor of his car by a Secret Service agent who lay on top of him for protection, the tense moments at the Dallas hospital as Johnson awaited news of Kennedy's condition, and the mad rush to get Johnson aboard Air Force One amid fears that the assassination might be part of a conspiracy-during which an immediate change took place in Johnson. Jack Valenti said that, 'even in that instant, there was a new demeanor' in the new President. 'Whatever emotions or passions he had in him, he had put them under a strict discipline,' Valenti said, so that 'he was very quiet and seemingly very much in command of himself.' There had been, in Valenti's words, 'a transformation.'


"Caro elucidates the thinking behind ... the decision to call Bobby Kennedy about the oath of office, and to take the oath on the plane in Dallas, rather than flying back to D.C. to do so. 'Even in this ?rst hour after John F. Kennedy's death, Lyndon Johnson seems to have had feelings that would torment him for the rest of his life-feelings understandable in any man placed in the Presidency not through an election but through an assassin's bullet, and feelings exacerbated, in his case, by the contrast, and what he felt was the world's view of the contrast, between him and the President he was replacing; by the contempt in which he had been held by the people around the President; and by the stark geographical fact of where the act elevating him to o?ce had taken place,' Caro writes. However, 'through the recollections of people present in the room' when Johnson took the oath, 'there runs a common theme,' Caro writes: 'a sense that, out of aimless confusion, order was quickly emerging' due to Johnson's quick decision-making and leadership. 'You see, it was just that he was coming back to himself,' Horace Busby, a longtime Johnson aide, explains to Caro. 'He was back where he belonged. He was back in command.' Caro writes that, 'for the ?rst time in three years, he looked like the Lyndon Johnson of the Senate ?oor. Now he had suddenly come to the very pinnacle of power. However he had got there, whatever concatenation of circumstance and tragedy-whatever fate-had put him there, he was there, and he knew what to do there.'" Abstract, and link for subscribers http://nyr.kr/GRd8Kt $18.98 Amazon pre-order http://amzn.to/GQ0CgY
Posted by J David Morgan at 14:03