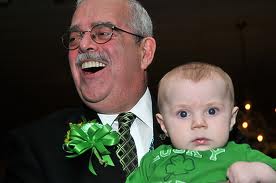 A happy St Paddy's Day to all my readers.

Apparently the surname "Morgan" could mean - the person who came from across the sea. Many Irish people moved to South Wales as the coal and steel industries developed. But before that there were frequent crossings of the Irish sea. So perhaps I have Irish ancestry. In any event my wife's family comes from Waterford.

But St Patrick himself may have been Welsh. Some believe that he was born in what is currently "Wales", whilst others (possibly the majority of scholars) think he was born in the then Welsh-speaking area of Strathclyde in Scotland [There are a number of specific Celtic languages]

In "The Life of St David"(written in the late 11th century by Rhigfarch (Rhygyfarch) but supplemented by Geraldus Cambrensis around 1200), Patrick is told of coming to Wales as a bishop and vowing to serve God at Glyn Rhosyn (now St. David's). But, he was warned in a dream that the place was reserved for someone who would arrive thirty years later. He was then shown Ireland in the distance by an angel as he stood on a rock called "the seat of St. Patrick." Patrick's mission was to evangelize the distant land, a task that he carried out in a remarkably short period.

{Many thanks to the Wales on Britannia website for this information}

Whether he was born in Wales, or I have Irish ancestry - I will be celebrating the day. I hope that everyone who attended last night's 18th Annual St Patrick's Day Fête in Fairfax hosted by Congressman Gerry Connolly had a great evening. I also hope that you have a great day.