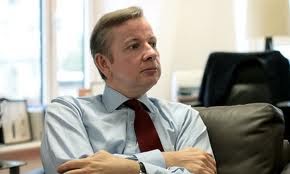 Estelle Morris (Baroness Morris of Yardley), a former Secretary of State herself (and a former teacher - rare for a Secretary of State for Education) gave an interview about the radical plans that the current Secretary of State is pursuing. Subsequently he has used powers to remove governing bodies who have resisted his wish to see schools "choose" Academy Status. His links to Rupert Murdoch are outlined here. His position, and connections with Atlantic Bridge are summarised here.

One of the weaknesses of Parliament is that is unable to stand up to the Government. Standing Order 14 gives the Government of the day control of all but a limited amount of parliamentary time. The doctrine of Collective Ministerial Responsibilty requires not only Ministers, but their unpaid assistants (PPSs) to vote with the Government or resign. Most backbenchers rarely "rebel". The House of Lords can be 'packed' by party loyalists. Once a Government is formed it is in the driving seat - even if it has a weak electoral mandate.

The video of Estelle Morris can be viewed here. (Apologies that watching the preceding advert is unavoidable)
Posted by J David Morgan at 05:00