I've not been writing many posts since I retired from lecturing. I enjoyed writing - and appreciated the discipline it imposed upon me to come up with something new - on a regular basis. But I have no students now - and I'm not as engaged at Westminster or in Washington as I once was. My interests have also developed. History has always been a passion for me - an essential when teaching law and politics, particularly in the UK - but of late my interests have focussed on local history - and globally on Roman, Greek and Chinese History.

I had also effectively retired from politics. From 2012 onwards I became increasingly concerned at the ways that politics, and campaigning were developing - particularly in the UK & US.

But 2019 became a key turning point for me. I put my name forward for consideration as a Labour Party Parliamentary Candidate (my previous runs for Westminster had concluded in the first decade of this century) - and was selected as the candidate in Buckingham - a huge (by British standards) constituency, but which I live only a couple of kilometres from. 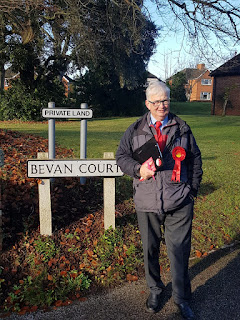 It was tremendous fun - but also exhausting, and troubling.

Perhaps the time has come to revive Washminster - to comment upon current issues in law and politics, but also to share some of my activities as a retiree.

So tomorrow, the first day of 2020, I intend to start blogging again. Do let me know what you think of the new format and content.