I'm not going to use this blog to declare my support for any candidate - or, if you are eligible to vote in that contest - try to persuade you to support one or other of the candidates. Of course, I have my own views - and have been telephone canvassing for one of the candidates - and my facebook friends also know who I am backing - but this is not the place for me to campaign!

It has turned out to be a very interesting election. It's the first that is truly 'one person, one vote'. In previous elections the decision has been made through an electoral college - and it was possible to vote many times - within the different electoral college. So in 1994, I had a vote as a Labour Party Member; and votes as a member of the then TGWU (now Unite) and GMB Unions; and votes as a member of various Socialist Socities including the Co-operative Party; the Fabian Society; the Society of Labour Lawyers and the Christian Socialist Movement.

But for most of its history, the Labour Party selected its leader, purely through the Parliamentary Labour Party. Labour MPs got to vote - but no one else. I'm glad those days are over - and I campaigned for the change - but it had certain merits. That electorate knew the potential leaders up close - saw them regularly in action - and could rate their performance. (Of course those days preceded complete and live TV broadcasting from the chamber and committee rooms).

So - without revealing who I will be voting for - what sort of things should the electorate for the 2015 Leadership (and Deputy Leadership) consider when casting their votes? [Voting is by ordered preference - 1 for your preferred candidate; 2 for your second choice and so on].

What I did to come to my decision was to rate each candidate on a grid. Some were subjective; other's objective - such as how many MPs had supported their nomination. The square for "Who is backing had two entries - one for the total number - and another for MPs who I have a particularly high respect for (so that list, being personal - is also not going to be published.) I gave 4 for the best candidate 3 for the second best and so on. I added the figures for each candidate - by this time the decision was clear for me. 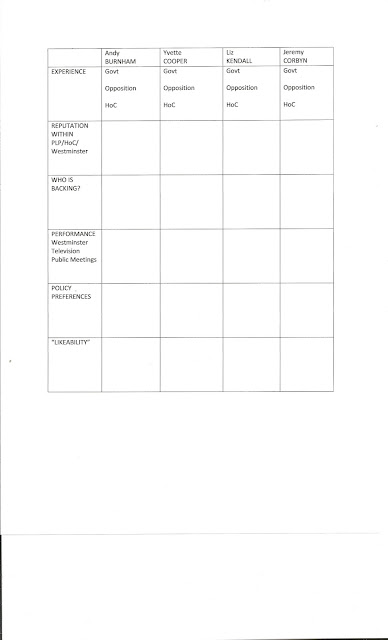 Do you have any other factors that you would propose? Please send me your suggestions and comments - to Washminster 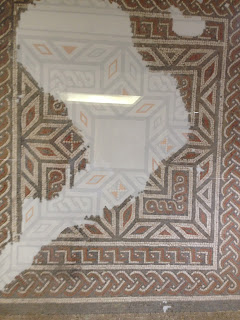 When not researching Parliament or Congress, I enjoy reading about - or visiting places associated with - history. Recently I started another blog dedicated to that passion.

The photograph today was taken in Milton Keynes Shopping Centre - it is a mosaic found in the Roman villa discovered in (what is now) Bancroft within the city. I have lots of information about the history of Britain's "New City". A friend from America told me that she was pleased that I loved the place to which I had moved - but "unlike many of ancient towns in England, Milton Keynes has no history". That was like a red rag to a bull - and I've been researching the great history of Milton Keynes ever since.

Do take a look at the new blog - which covers not just Milton Keynes - but wherever I indulge my passion for history.
Posted by J David Morgan at 05:30