Public Health - and the difference fitness can make

Today is election day in the USA. These are the times that polls close in the various states - and special attention will be paid to the key Senate races. Exit polls should be available from the times below - 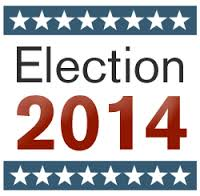 Last week Don Wolfensberger published the following article in Roll Call. I have a great deal of respect for his column and his work. It's an article worth reading -

An interesting debate is swirling around next Tuesday’s midterm elections for Congress. It involves the extent to which the sources, amounts and uses of campaign contributions will affect not only the outcomes of various hotly contested races but the makeup, policy agenda and processes of the next Congress.

The 2010 midterms returned Republicans to power in the House after four years of Democratic rule. They also brought in a wave of hardline tea party conservatives who made any kind of cooperation between the House, Senate and White House nearly impossible. The re-election of President Barack Obama in 2012 did not alter that dynamic. If anything, it made governing even more problematic as the 2013 government shutdown amply demonstrated.

Two events this month helped highlight the nexus between campaign financing and polarization in Congress.

The Bipartisan Policy Center convened a roundtable Oct. 16 that brought together scholars, political practitioners, good government groups and journalists to discuss whether the current state of campaign financing is responsible for the increasing level of polarization and gridlock in Congress.

The Lyndon B. Johnson School of Public Affairs hosted the second event Oct. 20 in Austin, “Mastering Congress: Political Reform 50 Years After the Great Society.” The program featured two former Texas congressmen who serve on the BPC Commission on Political Reform, and two political scientists who are coauthors of an award-winning book on the increasing role members of Congress play in raising money for their party campaign committees and other candidates.

Dueling duos of academic election experts kicked-off the former roundtable. Tom Mann and Anthony Corrado, governance studies fellows at the Brookings Institution, take issue with those who assert that campaign finance law restrictions have weakened the parties and strengthened outside groups that tend to support more extreme candidates. They maintain that parties are as strong as ever but that the Republican Party “has veered sharply right in recent decades” producing an “asymmetric polarization” characterized by an unwillingness to compromise and a set of “unusually confrontational tactics.”

University of Massachusetts political scientists Ray LaRaja and Brian Schaffner say their research at the state level suggests Mann and Corrado “could be wrong.” Their study indicates that, “states with party-centered campaign finance laws tend to be less polarized than states that constrain how the parties can support candidates.” This is because party organizations tend to fund more moderate, pragmatic candidates. Both sides of the debate concur that recent campaign financing developments are not the overriding cause of increased polarization but have certainly exacerbated it.

Eric Heberlig of the University of North Carolina and Bruce Larson of Gettysburg College, co-authors of “Congressional Parties, Institutional Ambition, and the Financing of Majority Control,” told the Austin conference about the explosive, coordinated growth since 1990 in campaign giving by members of Congress to their party committees and other candidates. Today, party leaders importune their members to give generously to their party campaign committees. The leadership establishes quotas for overall giving to the party depending on a member’s position in the leadership or on committees.

Consequently, members spend less time on their legislative work in Congress and more time raising campaign funds for their own re-election and their party. Former Reps. Henry Bonilla, R-Texas, and Charlie Gonzalez, D-Texas, agreed that members now spend at least one-fourth of their time attending fundraisers and dialing for dollars. Committees consequently are less involved in serious policymaking as party leaders increasingly shape the legislative agenda to satisfy party campaign contributors.  The former congressmen say this shift was especially noticeable beginning in 2006 (Bonilla) or 2010 (Gonzalez).

The increasing role of Super PACs and wealthy, independent donors in recent election cycles poses more unanswered questions about the impact of campaign giving on the agenda and processes of Congress. If there is some correlation between the growth and sources of campaign spending, on the one hand, and legislative outcomes in Congress, then record-breaking campaign spending this cycle could either make the 114th Congress even more gridlocked than its predecessor or more unified and productive around a few select issues — all depending on which party wins the Senate.

Don Wolfensberger is a resident scholar at the Bipartisan Policy Center, a senior scholar at the Woodrow Wilson Center and former staff director of the House Rules Committee.
Posted by J David Morgan at 18:00 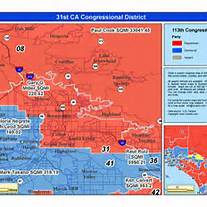 An “open seat” which is currently held by Gary Miller [GOP]. However latest polls suggest that the seat is leaning towards the Democrats. Chabot has not been able to raise as much funding as his opponent, or other GOP candidates in the area. See the LA Times article at http://www.latimes.com/local/political/la-me-pc-two-gop-fundraising-20141016-story.html


Rep Lee Terry [GOP] – Member of the House since 1999, who has survived a number of close re-election contests. He had promised at his first election only to serve three terms – but is now seeking election to his ninth Congress. Currently the seat is rated as a "toss up" by Cook and a "toss up/tilt Democrat" by Rothenberg. http://leeterry.com/


Brad Ashford [Dem] – A member of the Nebraska State Legislature, where he has served as the chairman of the Legislature’s Judiciary Committee. http://bradashfordforcongress.com/

Some "Toss Up" Races for the House


Rep Ann Kirkpatrick [Dem] –In 1980, she became Coconino County's first female deputy county attorney. In 2004, she began teaching business law and ethics at Coconino Community College. Former Member, Arizona House of Representatives. Ranking member of the Veterans’ Affairs Subcommittee on Oversight and Investigations. Vulnerable over Obamacare in a State in which even Democrat legislators are trying to change or dismantle the law.
http://www.kirkpatrickforarizona.com/


Rep Ron Barber [Dem] - vulnerable over Obamacare in a State in which even Democrat legislators are trying to change or dismantle the law. Owned & operated a small business called Toy Traders/Stork’s Nest, allowing families to trade and buy children’s toys. Worked at AZ Division of Developmental Disabilities for 30 yrs. Worked for Gabby Gifford as her District Director.
http://ronbarberforcongress.com/

CA07 (Even)
The district includes suburban Sacramento and much of Sacramento County. This includes Folsom (see Johnny Cash’s ‘Folsom Prison Blues’), but now an important Intel Campus.
Rep Ami Bera [Dem] – physician, who became Sacramento County’s Chief Medical Officer. He went on to become a Clinical Professor of Medicine and Associate Dean for Admissions and Outreach at University of California, Davis . Obamacare was a big issue in the 2010 election in which he lost.
http://www.beraforcongress.com/
Doug Ose [GOP] – a former Congressman for CA03 who served from 1999-2005, and who chaired a Government Reform sub-committee. He has focused on making Obamacare the centre of the election, though his website is currently stressing the water issue. http://www.dougose.com/
Posted by J David Morgan at 05:30

Elections to the House of Representatives 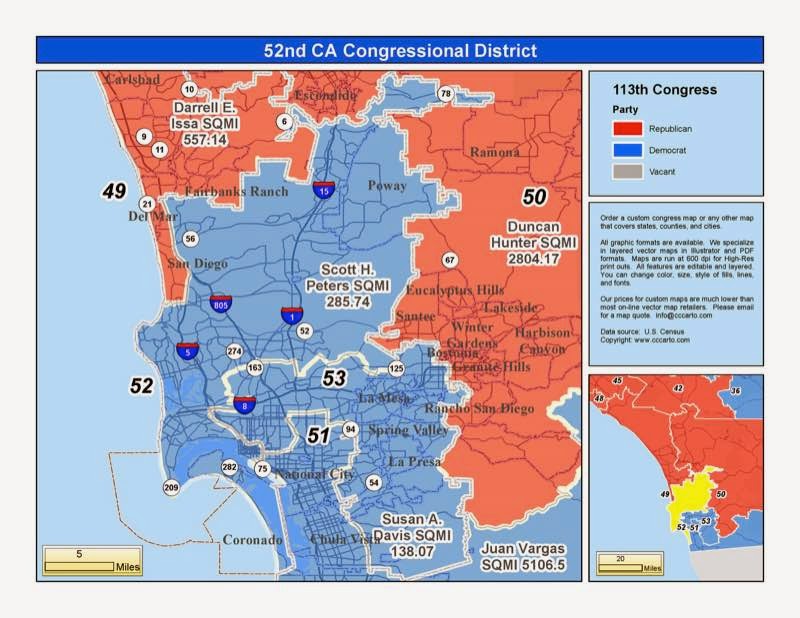 It's Election Day in the USA on Tuesday. Already many people will have voted - in what is sometimes described as "early voting". Certain places in a State may be open for a period before election to allow people who might not be able to vote on Election Day to cast their vote. Postal voting is available in some places.

All seats are up for re-election, but most will be won by the current incumbent or their party. Rothenberg suggests that there are 170 Democrat "safe seats", whilst the Republicans have 223 "safe seats". The battle is over the fate of approximately 50 seats. The key number is 218, which would give a majority in the 435 seat House. The Democrats need a net gain of 17 to win such a majority - and Rothenberg rates only 14 Republican seats to be in play; whereas the more cautious Cook reckons that one Republic held seat "leans Democratic"; 6 Republican seats are a "toss up"; 5 seats "lean Republican"; 13 "marginal seats are "likely Republican" (but to make matters worse 3 "likely Republican" seats were Democrat held in the 113th Congress. 16 Democrat seats are regarded by Cook as "toss up").

The last days of campaigning

President Obama to speak at Wayne State in Detroit on Saturday, Nov. 1; 7 p.m
Obama is campaigning on behalf of former Rep. Mark Schauer running against Gov. Rick Snyder and Rep. Gary Peters, D-Bloomfield Township.
Obama will travel to Philadelphia for a campaign event with Pennsylvania gubernatorial candidate Tom Wolf on Sunday, Nov. 2; and to Bridgeport, Conn., for an event with Gov. Dan Malloy and other Connecticut Democrats.

Hillary Clinton to rally for Sen. Mary Landrieu (D-La.) on Saturday, Nov. 1
The possible 2016 presidential contender will headline a women's rally for Landrieu.

Bill Clinton returning to Iowa to stump for Rep. Bruce Braley on Saturday; 2pm
The former president will headline an "Iowa Votes" rally with Braley in downtown Des Moines on Saturday, and then appear at Braley's Blues and BBQ fundraiser that evening in Waterloo. Braley is locked in a tight battle with Republican state Sen. Joni Ernst.

Rick Santorum heads to Iowa Saturday night; 6:45 pm
Former U.S. Sen. Rick Santorum, who is exploring a possible Republican bid for president in 2016, will appear in Waterloo and Cedar Falls in support of get-out-the-vote efforts for Iowa Republican Party candidates.

Email ThisBlogThis!Share to TwitterShare to FacebookShare to Pinterest
Labels: 2014 US Elections, The Hill