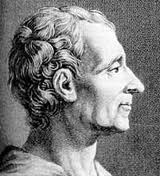 The US Constitution is built upon the foundation of a separation of powers. Montesquieu, amongst others, had highlighted the importance of ensuring that the differing functions of legislating (making law); executing the laws (carrying out the laws and providing day to day administration) ; and judging - both interpreting the laws and deciding in invidual cases - should be in the hands of separate groups of individuals. Hence a member of Congress cannot be at the same time a member of the Executive (serving the President) or a member of the judiciary.

On the face of it, Britain seems to show a fusion, rather than a separation of powers. The doctrines of ministerial responsibility are based on the principle that Government Ministers will also be members of either the House of Commons or the House of Lords. The Lord Chancellor was for centuries a member of Parliament (almost invariably in the House of Lords); the presiding officer and major player in the Lords; a member of Cabinet and an active judge.

However - it is useful to remember that Montesquieu actually praised Britain as a shining example of 'separation of powers'. It can be fairly described as a major principle of the British system. True fusion of powers ended with the decline of absolute royal power.

The House of Commons Library have produced an excellent paper on separation of powers. It is available here. Students of UK Constitutional Law (including Open University W200 and W201 courses) will find that the process of condensing the information in this paper will assist their revision immensely.
Posted by J David Morgan at 05:00