Taking Down the Words 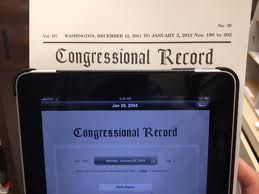 Two earlier posts today show an example from earlier this week of "words being taken down".

CQ's "American Congressional Dictionary" defines "Taking Down the Words" as "Requiring that a member's remarks be read to the chamber so that the presiding officer may determine whether they are offensive or violate the rules of that House. When any member makes a point of order against such remarks and asks that the words be "taken down", the alleged violator must immediately sit down and await the Chair's decision".

If they do breach the rules, the words mayb be struck from the record - Wednesday's Congressional Record: Daily Digest records:- "During the course of debate, exception was taken to certain words used and a request was made to have words taken down. The words were reported to the Committee of the Whole and the Chair subsequently announced that the Committee would rise.

On H1240 of Congressional Record - House Mr Frank's offending remarks have been replaced by "***", but the clerks reading of the words objected to are set out in full!!!

The Congressional Record App is available here to download to your iPad (and yes, I have it on mine!)

In the British Parliament such offending statements can also be the subject of points of order. [Remember that Jefferson was a great student of British parliamentary procedure - and many of the procedures in his manual are taken from the reports and books he read about the House of Commons].

In earlier editions of "Erskine May" there is a table listing "Unparliamentary Expressions" (p445 19th Edition, 1976) - which include "Blackguard...Cad...Coward...Criminal...Dog...Guttersnipe...Hooligan...Hypocrites...Jackass...Cheeky Young Pup...Rat....Swine". Standing Orders 43 & 44 sets out the punishment - (The Speaker) "shall order (the offender) to withdraw from the House during the remainder of that day's sitting...he may name such Member" and even suspend the offender.
Posted by J David Morgan at 11:36