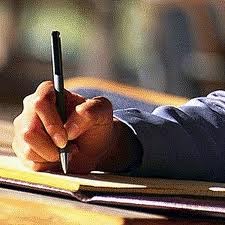 As an "Associate Lecturer" at the Open University, much time is spent between March and September marking 'eTMAs' (Electronically submitted 'Tutor Marked Assignments') for the Law Degree courses that I teach on. The OU, like all universities offering Qualifying Law Degrees, has challenging word limits. This is neither arbitrary nor an unnecessary extra burden on students.

It is intended that law students be encouraged to develop the skill of succinctness (apparently there are those who believe that lawyers have a tendency to say in ten words what could be said in three!!!!). The clients of lawyers deserve communication from those they have sought advice from, which is focused; understandable; and to the point!

So how can someone develop the skill of succinctness?

Part of the process of writing an essay involves revising, perhaps a number of times, what has been written. I believe that in journalistic circles the process is called “sub-editing” or “subbing”– For example

“He was not paying due care and attention when driving and this resulted in an accident.” (16 words)

The more someone does this, the more succinct their writing style becomes – and focused upon what is essential and what isn’t really needed – which is the real purpose of having word limits!