The City of Milton Keynes 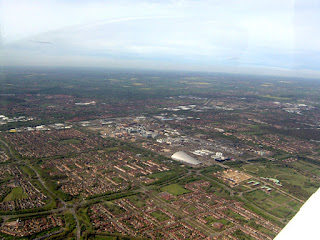 I may be a radical, but I was irritated by the campaign to plead with the Queen for her to "honour" Milton Keynes with city status. [As with most things, although the decision is made in the name of the Monarch - in practice it is a government decision - for my students - see 'Royal Prerogative'].

Milton Keynes is already a city. It is not the gift of the State or a Monarch. A city is made by its citizens. This is recognised in the United States. For 20 years I lived in the ancient settlement of Northampton. It was Henry II's favourite place in England (I think Chinon was his favourite place - I understand why) - and Parliaments have met there. But it has consistently been refused city status. In 1264 the town rebelled against the King - the scholars who had set up a university there were kicked out (imagine, it could have been Oxford and Northampton - but Oxhampton doesn't sound as right as Oxbridge) - and so local stories say the King swore that Northampton would never have a university or be a city. Well it has its own University now (2005). But unlike the much smaller Northampton in Massachusetts, it remains a mere borough.

It's about time British people asserted their rights. Let's be honest, there is a strong tradition. In 1215 the King was forced to sign the Magna Carta. The claim to the divine right of Kings and to tax without the consent of the people was resisted and Charles I lost his crown (and his head). British people have rioted to win the rights we now enjoy.

My passport now describes me as a "British Citizen", not a subject. I like my status as a citizen - both of the UK and of Milton Keynes. The local council is a unitary authority - having the same powers and responsibilities as 'cities' such as Birmingham, Leicester and Coventry. The only thing stopping Milton Keynes being a city is a bunch of bureaucrats who seem to have decided to award the 'honour' to another place in the name of the Queen.

If you want to get rid of wasteful bureaucracy - get rid of them. Let's stop pretending that we can only be citizens if we plead with the Crown to give us a 'gift', and she graciously bestows it upon the place. It is not an honour, but our right.

So I will continue to call the city where I live, the City of Milton Keynes - and recognise the right of my neighbours in Northampton to enjoy the same status as their younger, smaller, namesake in Massachusetts.