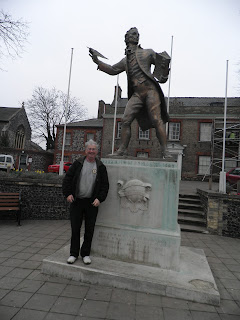 On Friday we took a leisurely drive towards Norwich. We stopped in the town of Thetford, just off the A11. It's a town I had always wanted to visit, as it was the birthplace of Thomas Paine. It's a very pleasant small town to visit (Jones the Butchers does an excellent sausage in a bap - and tea is available at the Art Gallery in the Guildhall). There is a town trail relating to Thomas Paine. The leaflet is available in a PDF. We did the trail, and I look took lots of video footage - which I will turn into a short video about him. (It may be a little while as I am currently in the middle of marking W201 eTMAs and preparing documents for my next meeting in Hull for my Ph.D.). 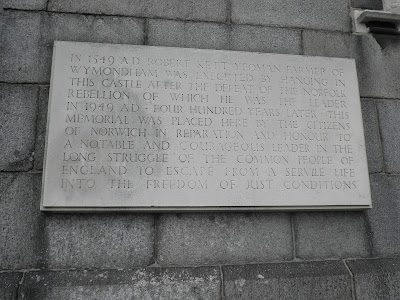 Afterwards we drove on to Norwich. We viewed the exterior of the Castle (a tour will be undertaken on a later visit). There was a memorial to Robert Kett - leader of "Kett's Rebellion" in 1549 - "a notable leader in the long struggle of the common people of England to escape from a servile life into the freedom of just conditions". The rebellion which took his name was one of many at the time againgst enclosures. The already rich and powerful were re-distributing wealth away from ordinary people towards themselves. Eventually some people said, enough is enough.

By the way the Budget Statement will be made in the House of Commons on Wednesday.
Posted by J David Morgan at 05:00