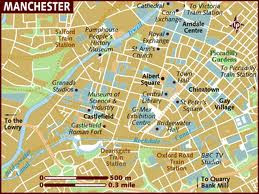 Some delegates for the Labour Party Conference (strictly, conferences - since today's is a special conference - purely for the announcement of the new leader - and their address to party members - and the world) have already arrived. Manchester Withington CLP [Constituency Labour Party - the party for a particular parliamentary electoral district] held an Eve of Conference dinner last night. Most delegates will be travelling up today - and some tomorrow.

Outside the conference hall itself - held on the site of the Peterloo Massacre - there is an exhibition area - at which various bodies and groups will be trying to get their messages across to the delegate & visitors. There is a busy "fringe" - some inside the security zone (which incorporates the Conference Centre; the Midland Hotel and the Radisson Hotel) and others at various venues in Manchester City Centre. The Town Hall is a major venue - where "think tanks" like the Fabian Society will be based.

I already have my planner for the week - there's so much on that I have selected the meetings of greatest interest to me - and listed them in order of preference for each time slot. Which I turn up to will depend on circumstances at the time. I will be posting during the conference - longer pieces on Washminster - and shorter notifications on facebook and twitter (jdavidmorgan - facebook/twitter - and WM_Alert - twitter)
Posted by J David Morgan at 05:04