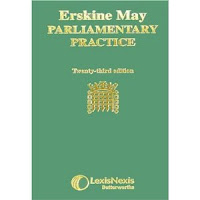 In Parliament "Erskine May" is a book - though he was a real person. The book's full title is "Erskine May's Treatise on the Law, Privileges, Proceedings and Usage of Parliament". It is the most authoritative book on parliamentary practice at Westminster. A short BBC film is available here.

Thomas Erskine May (later Lord Farnborough - though sadly this was the 2nd shortest peerage in British history - he died a week after his peerage was created) started work in the House of Commons aged 16 as an assistant librarian. After becoming a barrister he worked his way up as a parliamentary official until in 1861 he was appointed Clerk of the House of Commons. His "practical treatise" appeared in 1844.

In addition to his most famous work, he wrote a constitutional history (which can be downloaded as a free book here).
Posted by J David Morgan at 05:28