British Politics in Film (and TV) 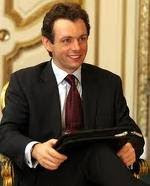 Britain has never had as large a film industry as the USA, but it has its own collection of political films. Earlier this year the Yorkshire Post published an article by Tony Earnshaw about Politics and British film

"There is something wan and feeble about British politics on film. Not for the Brits the stench of corruption that permeated the Watergate affair, or the gift of a wonderfully bent White House politico such as Richard Nixon.


No. The best Britannia can come up with is elected members fiddling their expenses, liars like Jeffrey Archer and Jonathan Aitken, a murky restaurant-based arrangement that led to a fractious partnership between Tony Blair and Gordon Brown, and long-forgotten MPs engaging in tawdry toe-sucking rumpy-pumpy dressed in their favourite football strips.

Admittedly, British politicians do sex scandals rather well, though it's hardly the heady stuff that creates world-class drama in the mould of Mr Smith Goes to Washington, The Manchurian Candidate or Seven Days in May. Hollywood has the monopoly on that."

The only film Earnshaw merited worthy of mention was Scandal, about the Profumo affair of the early 1960s. There are plenty of films (and made for TV movies) about incidents in British history. Henry VIII and Queen Elizabeth I's reigns and the English Civil War struggles are a frequently revisited subject. [Cromwell was my favourite]. British Prime Ministers are subjects of many films - from Disraeli in 'The Prime Minister' to the many films where Tony Blair is a key player - a role which Michael Sheen has excelled in.

"V for Vendetta" is an excellent film, though personally uncomfortable - the final scene portrays the Palace of Westminster being blown up - as I work there, those are pictures I'd rather not watch! My favourite comedy is Passport to Pimlico, a clever film based on the idea that Pimlico (an area to the south of London's Victoria Station -and close to Westminster) - is discovered not to be part of the UK. In the aftermath of World War Two (with rationing) the inhabitants reassert their independence.

On TV there are two excellent series - 'Yes Minister' (which became 'Yes Prime Minister') and 'The Thick of It'. The latter is closely related to the film 'In The Loop'. There is an excellent website dedicated to Yes Minister accessible here.
Posted by J David Morgan at 05:09