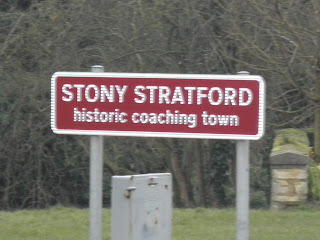 I live in Milton Keynes - a place some people think has no history. [It is a 'New City', planned from the 1960s; developed since - and now with a population of almost a quarter of a million]. But it is full of history. A Roman Villa can be visited in Bancroft; the major Roman road, later known as Watling Street runs through the city (and close to where I live); ancient villages remain [often hidden within one of the estates on the grid] - and Bletchley Park is a site and now museum of international historical significance.

Then there is Stony Stratford - sitting on Watling Street. It wasn't a Roman town itself (MK's Roman town was 'Magiovinium' - to the South East of Fenny Stratford) - and there is evidence of roman settlement across the Great Ouse in Old Stratford - but it came into its own during the medieval period. Watling Street continued to be a major route across England - and stony Stratford developed as a coaching town. If you walk around you'll see the tell-tale signs of coaching inns - 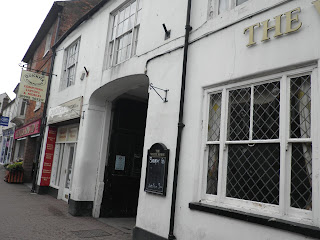 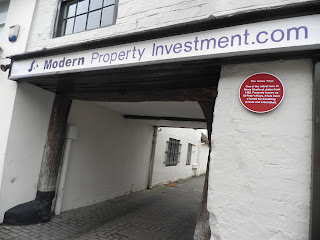 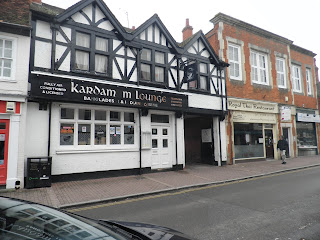 After the death of Edward IV, his son - the twelve year old Edward - left Ludlow heading for London. At Stony Stratford his uncle, Richard of Gloucester [to become Richard III] - who was named as his protector in Edward IV's will - met with the young Edward V - and took him into his care. 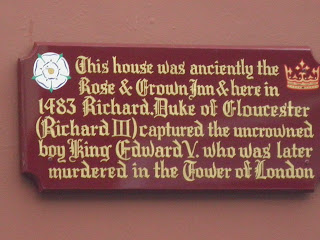 This plaque can be seen on a property in Stony Stratford High Street. At the moment (in the little spare time I have), I'm reading about Richard III. As someone with many connections to Leicester (and a former tutor at Leicester University), I followed closely the developments involving the discovery of Richard III's body. Currently I'm part way through John Ashdown-Hill's fascinating book "The Last Days of Richard III".

In the interests of full disclosure I should mention that I've also recently joined the Richard III Society.
Posted by J David Morgan at 05:30