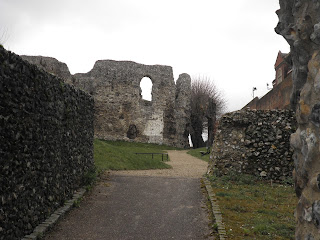 One of my Open University tutorial groups meets in Reading. It's now a very pleasant town with the River Kennet and the Kennet and Avon Canal running through - and lots of coffee shops.

It also has a link with Parliament. In 1453 Parliament met at Reading Abbey.

The Parliament Rolls of Medieval England (British History Online) contains information about this...

"The parliament of 1453, in being for a total of fifty-five weeks, was the second longest of the reign of Henry VI's reign to date, opening on 6 March 1453 and closing on 17 April 1454. Like the longest parliament of the reign, that of 1445, the parliament of 1453 sat for less than half of its total duration - twenty-one weeks and four days. The first session, lasting only three weeks, was held at Reading in March. A prorogation for Easter was followed by a second session at Westminster for nine and a half weeks from 25 April to 2 July. A prorogation to 12 November was then made. Despite the commons making generous taxation grants in the first and second sessions to underwrite military activity, it proved impossible to hold on to Guienne. The English were defeated in battle at Castillon on 17 July 1453. It is possible that it was news of this disaster which brought on King Henry's debilitating stupor. The exact date of its onset is not clear but most likely occurred in early August. On 13 October 1453, Edward, prince of Wales, was born.

Parliament was due to reconvene at Reading on 12 November, but it was on that day prorogued further, to 11 February 1454, in the hope of the king's recovery. Richard, duke of York, who had been absent from the first two sessions of the parliament, was brought back onto the council in mid- November 1453. A few days later, Edmund Beaufort, duke of Somerset, who had dominated the king's government to this point, was committed to the Tower where he remained until late January-early February 1455, thus being absent from the parliamentary session of 1454. The parliament did reconvene in Reading on 11 February as planned but was immediately transferred to Westminster where it reopened on 14 February 1454...

Parliament opened at in the refectory of Reading Abbey on Tuesday 6 March 1453. The chancellor, John Kemp, who had been translated to the archbishopric of Canterbury in July 1452, was absent. According to the roll (item 1), the parliament was opened by William, bishop of Lincoln, but as the bishop of Lincoln was at this point John Chedworth, this must be a scribal error for William Waynflete, bishop of Winchester, who was amongst those appointed as triers of petitions. When the commons came before the duke of York in the fourth session on 19 March 1454 (item 30), they claimed that at the commencement of 'this present parliament at Reading', the chancellor had spoken about the setting up of a 'sadde and wise' council of wise and discreet peers to whom all people might have recourse in the administration of justice. This suggests that Kemp was present early in the first session even if he was absent at the opening. There is no reference on the roll to the setting up of such a council. Indeed, as we shall see, the commons' complaint in March 1454 was that they had not been informed of the actual establishment of such a council. Another intriguing allusion to the business of the parliament exists in a royal letter sent to the earls of Salisbury and Northumberland on 8 October 1453, where it is noted that 'also that in our parliament which is still continued ('yit continued'), you and all other lords were warned that if any of you felt himself aggrieved against another, he should put his complaint in writing'...There is nothing on the roll about such an order, although the prorogation of 2 July 1453 with its reference to the king's intention to travel to various parts of his realm to end riots and misdeeds (item 20) would no doubt provide a context for such a command to be made collectively to the lords as they left parliament, and also for a commons complaint about the peace being badly kept (Parliament of 1453, Appendix item 38).

After the appointment of receivers and triers of petitions (items 2-5), the speaker was presented on Thursday 8 March (item 6). The choice fell on Thomas Thorpe. He had considerable administrative experience in the Exchequer as a summoner and from 1444 to 1452 as Lord Treasurer's Remembrancer, and had links with the Beaufort family. Although Thorpe had lost his post when York's associate, John Tiptoft, earl of Worcester, became treasurer of England on 15 April 1452, his links with Edmund Beaufort were strong enough for him to be promised the reversion of the chancellorship of the Exchequer in November 1452 as well as £200 for the vexations he had suffered. By the time parliament met he may already have become third baron of the exchequer; certainly he occupied this post by 26 April 1453."
Posted by J David Morgan at 05:30