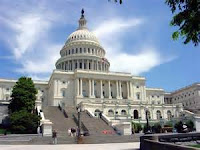 The Washminster Blog is part of a family of services provided by David Morgan aimed at those with an interest in Law (He is an Associate Lecturer with the Open University for their W200 and W201 courses); the UK Parliament; US Congress; European Parliament and the French Parlement.

In addition to the Washminster Blog (which has been running since early March 2007), which covers all the above subjects (and throws in a bit of UK, US, French & European history - plus some sport (in fact anything that takes its fancy) - there are sister sites.

jdm_progressive is David's twitter account providing news and views - again mainly, but not exclusively on UK, US, French & European politics and law.

JDM's Daily is published daily - it republishes stories from RSS feeds covering thee main subjects. You can subscribe to the Daily - which will then be delivered directly to your email inbox. It comes out each day at 05:00 (UK time).

If you live in (or are interested in) Milton Keynes, David intends to start posting shortly on the Furzton Blog; West_of_Watling_Street  and middlemiltonkeynes blogs.
Posted by J David Morgan at 15:46