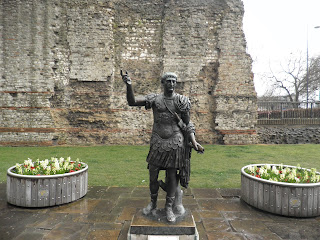 I've recently enjoyed a couple of days walking around London. Not my usual haunts around Westminster - but the old Roman settlement of  'Londinium'. This Roman 'new town' (the Milton Keynes of its day) was established within seven years of the invasion of Britain. There may have been earlier settlement in the area, but this was a planned new town.

Londinium was build in an area north of the (then much wider) Thames, which included what we now know as Ludgate Hill [where St Paul's is close to the summit] and Cornhill [where the main Forum was built)]. The River Fleet (now buried underground was the major river flowing into the Thames at the western end of the settlement). Between Ludgate Hill and Cornhill the "Walbrook" ran. Only a couple of weeks ago announcements were made about the significance of the finds on a site where the stream used to run. [Details here and BBC video].

Armed with the Museum of London's "Londinium" maps (1981 and 2011 editions - both are useful and complemented each other. An application showing Londinium's sites imposed on top of a modern map is available here.) I walked around the modern city.

These are two photographs taken from London Bridge showing the extent of the settlement along the river. Blackfriars Bridge (with the new covers for the extended platforms) marks the western end where the Fleet met the Thames. 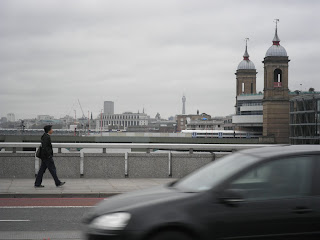 The Tower of London marks the eastern end. 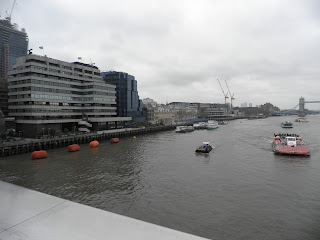 The current bridge lies a few feet to the west of the original Roman bridge. Of course the first "Londinium" had a short life. After only a decade it was burnt during Boudica's rebellion. But a new "Londinium" was soon built, which prospered greatly.

It was well worth visiting the Museum of London. There are some excellent displays and models to help a visitor understand the Roman city - and how it developed into today's London. I was surprised how much of the walls of London are now visible - and how marked the two hills of Ludgate and Cornhill remain.

I also visited the amphitheatre which lies below the Guildhall. The Museum of London and the Amphitheatre are open to the public.  A series of pdfs describe the walk around the walls.