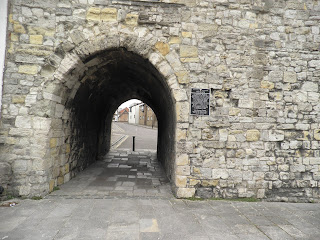 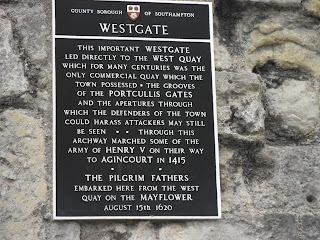 On Easter Sunday we headed down to Southampton for a couple of days relaxation before heading to Sheffield and then to Ipswich. We got home last Saturday.

Southampton is a fascinating place for anyone with an interest in history (we also had some good meals there!). The walls that were built in the medieval period can still be seen, and - especially on a quiet Sunday and bank holiday - it's easy to picture the original city. Our hotel was just outside the Westgate (in the sea, then but happily not now). 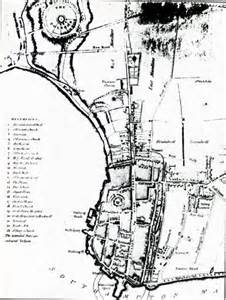 As the plaque shows it was from there that Henry V and his troops set off for France [and the battle we know of as 'Agincourt' - there's a useful site here about the battle and the museum], and from which the Pilgrim Fathers set off for America. They only got as far as the west of the British Isles before having to return to Plymouth. Finally the Mayflower sailed from there across the Atlantic.

We also visited the SeaCity museum, which was excellent - lots on the people who came from; left from and lived in Southampton. There were two excellent exhibitions about the Titanic (one on the ship itself and its sinking; the other on the 'myth' of the Titanic). well worth a visit - particularly if it is a cold and/or wet day.

Further information about visiting Southampton is available here and here.
Posted by J David Morgan at 05:30