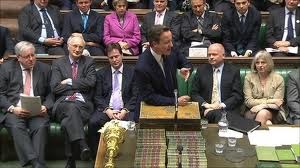 I commented in yesterday’s post that I despised PMQs (Prime Minister’s Question time in the House of Commons). Don’t get me wrong – it can be tremendous fun. TV doesn’t do justice to the atmosphere – which can be electric. If you ever get the chance to see it in person – do go. But tremendous fun is praise for entertainment. Sadly, it’s the only coverage of Parliament that many people see – and it can be quite off-putting. It is of limited value for scrutiny. I fear that it has helped to lower Parliament in the eyes of the public.


Prime Ministers put a lot of effort into preparing for PMQs. They have extensive briefings – and both “do their homework” (reading the written briefings – preparing to answer what ever is likely to be thrown at them), and practice with colleagues (at what Americans would call murder boards). In any event, the parliamentary experienced on the way up is sufficient to make Prime Minister’s experienced at dealing with difficult questions.

There can be key “soundbites” – and the weekly battle between a Prime Minister and the Leader of the Opposition is closely analysed – and success at the dispatch box can have important electoral repercussions. However, imho (I’m getting better at the shorthand used in internet communications), more heat than light is generated, and a heavy price is paid for MP’s “fun”.