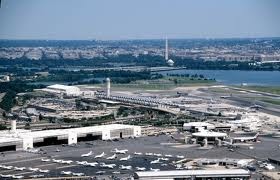 When I flew into Washington DC last month, instead of using Dulles (the international airport, which I did fly out from on my return), I flew into National Airport. It has been renamed after President Reagan, but I know – and respect the views of – many of my friends who, on principle, refuse to call it after a President who was disliked as much as he was loved.


The airport is really convenient for the city. It is on the blue and yellow metro lines – and is only a short distance from the Capital (3 miles away). On my 25 mile walk from Mount Vernon to the Senate last year, we walked on the Mount Vernon Trail through the grounds of the airport. Many members of Congress use the airport to travel between Washington and their home districts.

Construction began in 1940, after President Roosevelt made a recess appropriation of $15 million to build a new Airport by reallocating funds from other purposes. Some of the original buildings can still be seen. (The terminal itself is modern).

Information about the airport can be found here.
Posted by J David Morgan at 05:30