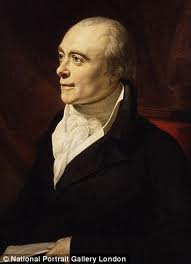 In a corner of what was once the Lobby of the House of Commons, in St Stephen’s Hall – some flowers have been placed to commemorate the 200th anniversary of the assassination of Spencer Perceval. He was the only British Prime Minister to have been murdered. He was also unusual in that at the time of his death he was also Chancellor of the Exchequer; Leader of the House of commons; and Chancellor of the Duchy of Lancaster.

John Bellingham had visited the Strangers’ Gallery in the House a number of times in the preceding days, even asking a journalist to identify various members of the government. The murder took place on Monday 11th May 1812. He had spent the afternoon with his landlady and her son in a museum in St James (close to Chatham House). They had walked to Sidney’s Alley near Leicester Square – then, alone, he walked down to the Palace of Westminster, and joined the crowd standing in the lobby, standing by the closed part of the double doors. When the Prime Minister entered the lobby on his way into the chamber Bellingham took his right hand out of an enlarged inside pocket of his coat – stretched out his arm, bringing the barrel of a pistol up to Percival’s chest – and fatally shot the Prime Minister.

While the murder shocked the politicians – it was met with jubilant celebrations . Bellingham was even held in the Palace of Westminster until after midnight, by which time the crowds had been cleared. He taken to Newgate Prrison; tried on the Friday; and hanged the following Monday morning.

Over the last few hours I read "Why Spencer Percival had to die" by Andro Linklater - it is compelling reading, and I thoroughly recommend it. The background - both personal and political - is dealt with in depth, and some interesting theories put forward.