One of the benefits of membership of the Friends of the British Museum is that you can visit the high profile exhibitions without paying - as often as you wish (Though may be worth getting in touch beforehand for days when high levels of visitors are expected). So last week I took the opportunity to revisit the Troy Exhibition. I've described the layout of the exhibition in my previous post. This time I concentrated on specific details - particularly the major stories about the conflict, the various deities and humans involved, and the archaeology of the period that the Trojan War may relate to (Troy VI - VII) 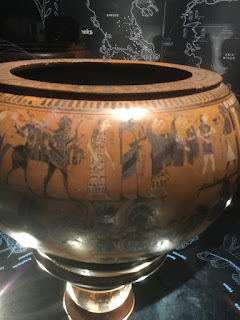 My favourite exhibit is the Sophilos Dinos - it's a wine mixing bowl which portrays the Wedding of Peleus and Thetis. Peleus was the son of Aeacus, the King of Aegina - a mortal who took part in the expedition of the Argonauts and various other adventures. His bride was the sea-goddess Thetis. Zeus was very interested in her, but he had heard from Prometheus that her son was to be greater than its father (a worry for a god who had toppled his own father (Cronos - who had himself overthrown his father, Ouranos))!  So Zeus sought to marry Thetis off to a mortal. The bowl shows in its top frames, the procession at the wedding led by Zeus and his (long suffering) wife, Hera. Many of the other gods are portrayed and identified on the bowl. This event was held on Mount Pelion.The wedding was disrupted by Eris, goddess of discord (see below) - who had not been invited. She threw into the celebrations a golden apple inscribed with the words, "for the fairest". The goddesses Hera, Athena and Aphrodite all claimed it - which led to a dispute which Paris, the son of the King of Troy was called upon to resolve. Bribes were offered to him by each of the three contestants. Aphrodite "won" by promising Paris the most beautiful woman in the world - Helen. Unfortunately she was already the wife of the King of Sparta.. Paris took Helen (depending on the source, this was a story of two lovers running away together, or Paris' forcible abduction of the lady) back to Troy. 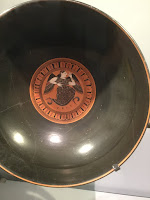 It was this which sparked the Trojan War! The "gods" were themselves divided. Poseidon; Hera, Hephaestus and Athena backed the Greeks - while Ares; Apollo; Aphrodite and Artemis aided the Trojans.

Thetis and Peleus had one son, Achilles - a major character in the Trojan War. His rage and brutality is depicted in many of the exhibits at the British Museum exhibition. Helen is also another major subject of the exhibition (and in a number of books on sale in the attached bookshop).

The variety and beauty of so many exhibits is breathtaking. 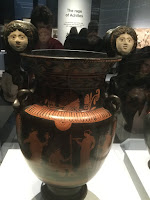 The only timeframe for the conflict is 1400 - 1200 BC - but Troy had a much longer history. It was first settled around 3000 BCE. The levels found at Hissarlik are

Schliemann identified "Priam's Treasure" - and there are many exhibits on show at this exhibition. Sadly, these date back to the early Bronze Age (2550 - 2300 BCE), more than a thousand years before the time that the Trojan War is associated with.

Personally, I'm more interested in the mythology and the archaeology, but there is an excellent section on how the stories of the conflict have inspired writers and artists in the centuries that followed. My favourite painting is Herbert Draper's "Ulysses and the Sirens". The agony of Ulysses - tied to the ship's mast to stop him succumbing to the sirens is so powerfully portrayed.

As I wrote in my earlier post - I intend to revisit the exhibition before it closes on March 8th - a few hours isn't enough.

Ahead of the Chinese New Year - this weekend - I made a visit to one of my favourite permanent galleries in the Museum. This covers  21,000 years of Chinese history - and what a history! - more on that soon...
Posted by J David Morgan at 05:01