Last weekend I was in the West Country. I had the opportunity to travel from Bristol to Bath, one of  my all-time favourite places. The day was spent in the Roman Baths - a place I have visited many times in my life, and there have been many great developments there over those years. The visit (which includes a handheld guide - with various options, and the ability to choose which places you listen to the relevant recording) was excellent. There are additional tours led by a guide at different times of the day. 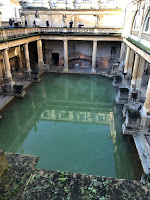 At the end of my previous visit, I had invested in some excellent books. There is "The Essential Roman Baths" which is a well illustrated summary guide produced for visitors. Barry Cunliffe's excellent "Roman Bath Discovered" reports his own archaeological digs, and brings together the evidence gathered in earlier excavations. I found it indispensable, both before the visit, and during my walk around.

The statues of the Roman Emperors and governors were only made and erected less than 130 years ago, so were of limited interest. It was the height of the Bath building in later Roman times that staggered me - it was close to the height of the nearby Bath Abbey. It would have towered about the town of Aquae Sulis (Bath) Part of the vaulting for that ceiling was on display. It replaced an earlier lower wooden roof - which had rotted in a relatively short period. 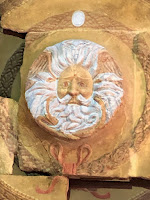 I was particularly impressed at the so called "Gorgon's Head Pediment", found in 1790 - in pieces - now on display just off the Great Bath. I spent some time there listening to the commentary and reading Cunliffe. A light display allows you to see what it originally looked like - with "missing pieces", and of greatest help, in the original colours. A gorgon is a female creature - but this is definitely a man. His hair was red. It was carved by Gauls from Gaul - no wonder that it doesn't look like a Roman god, but a red-headed celt. It was probably their depiction of Neptune - who shared divine responsibility for waters with Minerva. The goddess inside the temple was Sulis Minerva - a Celtic goddess seen as the local version of Minerva. The Roman Baths website states that "Sulis is the Celtic goddess of healing and sacred waters and Minerva the Roman goddess of wisdom." Minerva was herself an Etruscan goddess adopted by the Romans who was very similar to Athena (both burst from the head of the Chief God who had devoured her mother - in order to prevent her birth). Minerva and Athena's symbol was the owl - who can be seen on the pediment. 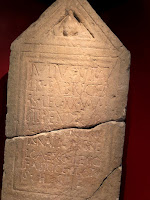 I took loads of photographs, and only a selection are on this blog. Moving on, there was an excellent exhibition of finds - and their explanations. I was particularly interested in the story of Julius Vitalis - who probably came from what is today, Belgium, joined the Roman army at 20, was an armourer within the Twentieth Legion and died aged only 29. His memorial is now next to a display showing the work of an armourer.

Other exhibits include the coins found in the Beau Street Hoard (there is a publication available just about this produced by the British Museum) and curse tablets.

In tomorrow's post I will describe the latter part of the tour.