Through the Temple and Baths of Aquae Sulis 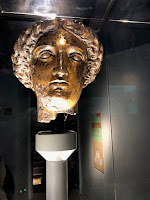 The route of the tour takes you below the passage known as "Abbey Churchyard" towards Stall Street. You walk at the original Roman level and can see the remains of the Temple Courtyard. The remains of a major altar (but probably not the only one in the courtyard), where animals were sacrificed. Near to it is the Haruspex Stone. This was given  by a Haruspex - a person responsible for removing the organs of the sacrificed animal for examination in order to predict the future. One of the treasures is the gilded bronze head of Minerva. It had been re-gilded many times - probably because of the effect of being close to a constantly burning flame within the temple. Ordinary people would never have seen this. The inside of the temple was exclusive haunt of the priests. 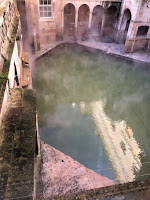 The next highlight is the sacred spring itself. You can watch (it is very relaxing) the bubbles as heated waters (42C) rise. Once this would have been a mystical place - as the spring in its natural state brought up bubbles and steam in a slight valley near the River Avon. There were other natural hot springs in the vicinity, but this was the biggest. It provided both the heat and the water for the Great Bath. You can see the roman plumbing as the water was taken through and around the building before being discharged towards the Avon. Numerous coins were thrown in and a chart shows the dates of these coins. The oldest comes from the period of the Roman Republic (dated to 133 - 31 BCE), whilst the greatest number date from the reign of Antonius Pius (138-161 CE). 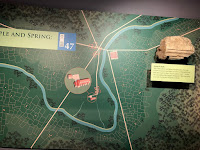 There were a number of springs in the area - and over time a walled town grew up. The map to the left shows the main roads serving the spa at Aquae Sulis. 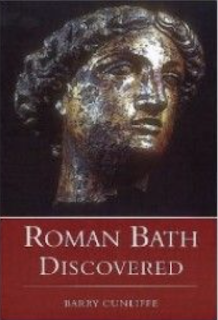 While the Great Bath is the centrepiece of the complex, other baths and rooms were available. Many alterations were made over the Roman period. On our way to and from Bristol we used the Fosse Way which links Bath to Cirencester, Leicester and Lincoln. The M4/A419/A420/A34/A4421/A421 route between Bath and Milton Keynes is quicker - but I love the route following the Fosse Way as it goes through Cirencester, and close to the superb Roman Villa at Chedworth and close to the source of the River Thames.

The tour finishes with an opportunity to taste the hot spring water. Then you can visit the gift shop. (The shop is also accessible from Stall Street, but there is no direct access to the Baths.

If you are in the Bath area, it is well worth a visit. - and don't forget to take a look at Barry Cunliffe's excellent "Roman Bath Discovered"! The latest information about visiting the Roman Baths is here.