Troy - The Exhibition in "New Troy"

There is an old British myth, repeated (or invented) by Geoffrey Of Monmouth for his book "History of the Kings of Britain" that London was founded by Brutus (the grandson of Aeneas - who escaped from Troy, and founded Rome) and was first called "Troy Novant" (New Troy). [While archaeological evidence suggests that London was first built as a "new city" by the Romans, it was close to the area inhabited by the Trinovantes tribe] 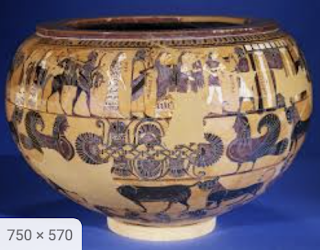 Earlier this week I made my first trip to London since before the election was called, to finally visit the exhibition currently on at the British Museum. It was well worth visiting - and if you can make it to the British Museum before it closes on 8th March - I would thoroughly encourage you to go. It tells the stories of the "myths", the archaeology and the impact of the story in later literature and art. I intend to make at least another visit before it closes. For further information and to book tickets click here.

There are a number of excellent books on sale in the shop attached to the exhibition hall. One that caught my eye was  "Enraged" by Emily Katz Anhalt. It seeks to argue 'Why violent times need Ancient Greek myths'. It was published in 2017 - and makes some very modern points - "History shows that the transition from tribalism to civil society and the maintenance of civil society both require individuals to restrain their own rage and to stop admiring rage in others. Ancient Greek myths encourage us to reject the primitive, tribal view of rage as a marker of the correctness of our cause."...."From the eighth through the fifth century BCE, Greek myths accompanied and promoted the Greeks' historically unprecedented movement away from autocracy toward broader forms of political participation"..."Performed publicly as epic songs or tragic plays, ancient Greek myths exposed tyranny and violence as universal toxins capable of destroying perpetrator and victim alike."..."Ancient Greek myths emphasise the self-destructiveness of rage and undermine the traditional equation of vengeance with justice" (these are just a few comments now underlined in pencil in my own copy of the book). Anhalt chapters explain and apply the Iliad books 6, 9, 10-24 Sophocles' 'Ajax', and Euripides' 'Hecuba'. I'm finding the book to be useful in developing my own thinking. The book is published by Yale University Press.

Do let me (and 'Washminster Blog') what you think of the book.