Tours of the Palace

One of the things I enjoy about working at Westminster is that I can look around an incredibly important and interesting historical building - and occasionally take small tours. There is so much to see.

I often start my tours by putting the site in context. Unlike the US Congress it was not planned as a national legislature. It doesn't consequently stand on a hill dominating the capital city. Like so much at Westminster, it's position is due to accidents of geography and history. 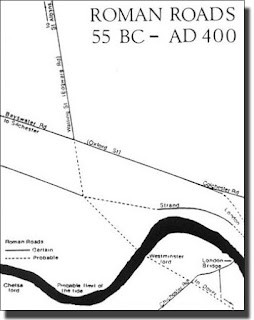 Watling Street ran from Richborough and Dover (Kent) to Wroxeter (Shropshire), but makes some odd turns in the London area. The line from Kent turns sharply north across the original London Bridge into the Roman town of Londinium (excellent iPad app from the Museum of London) entering from the south but exiting to the West. It continues along Colchester Road and Oxford Street (see map above) then turns sharply northward.

London was in effect a "New City" - the original route, without diversions - went straight to the lowest ford on the River Thames - at Westminster. That ford ran through what is now the Terrace of the Houses of Parliament.

Most of the streams that flow into the Thames run straight down from the hills to the north and south of the River. 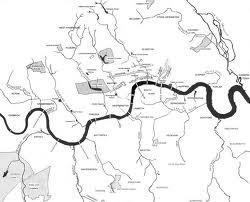 The River Tyburn is different. It's source is at Shepherds Well, south of Hampstead. It flowed normally through the sites of Swiss Cottage to Regent Park to near Marble Arch - but roughly on the site of Buckingham Palace it begins to split. One branch flows south to the site of Vauxhall Bridge. The other further splits to form "Thorney Island"

which mean "the place of blackberries" (sorry for the awful pun). This low lying, marshy - and often misty place is where Westminster now is. The streams are now underground. But it was from early times regarded as a place of religious significance. There are stories that the Druids had a "college" there  [the name "Toot Hill" is claimed to be a pagan religious site]. Tothill Street runs close to Parliament Square.

There is also a local story which has a temple of Apollo on the site of Westminster Abbey. In the Second Century one of the first British Christians, Lucius, was converted when an earthquake destroyed that temple. He built a church there. In 785 the Benedictines, under St Dunstan built a monastry there.

Lucius was said to be a "British King", but the first royal in residence that we have evidence for was King Canute. He built a palace on Thorney Island in 1016. It was Edward the Confessor who was to play a critical role in Westminster's development. He was a deeply religious man - and sought to (and succeeded) in building a mighty Abbey. Sensibly he decided that the best way to ensure that work proceeded satisfactorily was to move close to the building site. He made the "Palace of Westminster" his home.

It remained as a principle royal residence for centuries. Where the tidy building is now, buildings were thrown up without any kind of planning. Westminster Hall is the oldest part remaining -  but by 1834 there were a hotch potch of buildings of different sizes, ages and purposes. The Palace remained a royal residence until 1512 when a fire caused Henry VIII to move out. As the institution of Parliament developed the "Houses" gained permanent buildings. However it wasn't until 1547 that the House of Commons gained St Stephen's Hall as their permanent place of meeting.

Most of the Palace areas was destroyed by fire on the night of October 16th 1834. (the painting by Turner is reproduced in my post of last Wednesday)
Posted by J David Morgan at 05:30