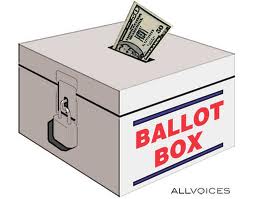 In democracies around the world, the role of money in politics is giving rise to serious concerns. The Citizens United decision by the US Supreme Court has been criticised for its potential to deny "giving voters a genuine choice and giving candidates a fair chance" in that "it threatens to further marginalize candidates without strong financial backing or extensive personal resources, thereby in effect narrowing the political arena". [Director of OSCE]. In the US there have been a number of unsuccessful attempts to limit the costs of fighting elections, and reduce dependence of candidates on money. There is a very informative CRS paper available here.

In the UK the amounts of money concerned are significantly lower - but the debate has been active since the 1990s. In recent months the Committee on Standards published a report on "Political Party Finance". Last week the Political and Constitutional Reform Committee also published a short report in which it concludes: -

"Despite reforms in recent years to the funding of political parties, public concern about the integrity of current arrangements remains. All the main political parties have asserted the importance of resolving the issues around political party finance, but there is a notable lack of progress towards reaching such a resolution. This concerns us.


In this Report we highlight the opportunity represented by the publication, on 22 November 2011, of the report of the Committee on Standards in Public Life on Political Party Finance, to achieve a cross-party solution to the issue. The Government should set out how it intends to achieve a balanced, non-partisan solution, before public confidence in politics is further undermined by some future scandal."

In previous centuries there were concerns of politicians bribing voters. As a result in the UK we have laws to deal with "treating". One Council's website has a list of definitions

•Bribery - candidates or their supporters cannot give money or offer gifts to pursuade you to vote a particular way.


•Treating - candidates or their supporters cannot directly or indirectly give or provide food, drink or entertainment in order to influence a voter.

•Intimidation - candidates or their supporters cannot use undue influence or intimidation of any kind to influence the way you vote.

But the influence of money is greater today. Free Speech is important - but is it undermined if only the very rich can afford to meaningly participate?

(Note - hyperlinks - underlined text, will take you to relevant information and documents)
Posted by J David Morgan at 11:51