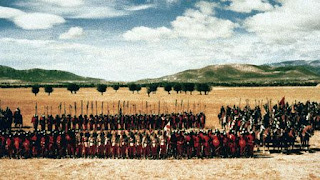 When I visit Washington, I usually go with a friend to one of the civil war battlefields in the area (we travel some distances - we spend a fascinating day in Gettysburg a few years ago). I recorded some videos of these visits

But Britain has its interesting battlefields too. I have always lived in Central England - and so have been a frequent visitor to the sites of two of the most important battles in British History

The Battle that ended the War of the Roses, saw the death of Richard III and the start of the Tudor dynasty. The exact site of the battle was in doubt for many years - as the documentary evidence was open to a number of different interpretations. However a major archeological investigation has shown the actual site. Work was due to finish last week on the new outdoor interpretation and trail.

You can link to the website of the Bosworth Battlefield here.

The photograph on today's post is taken from the 1955 Laurence Olivier film of Shakespeare's Richard III. However Bosworth looks NOTHING like this. The film was shot in Spain. There are no mountains in the background of this green, rolling countryside in Leicestershire. As the Richard III Society would point out, that is probably one of the least of the inaccuracies of the play and film. 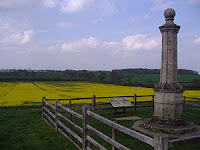 The decisive battle of the English Civil War - in which the Parliamentary forces destroyed the main field army of King Charles I. It was fought on 14th June 1645.

Details of the project to enhance the visitors' facilities can be found here.
Posted by J David Morgan at 05:27