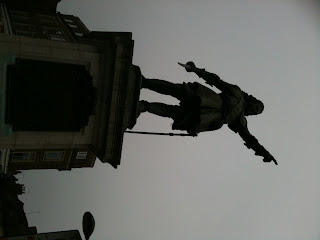 Another English hero associated with Aylesbury is John Hampden. He was a leader of the anti-Crown parliamentarians in the House of Commons. It was he who was taken to court over his refusal to pay the Ship Money (on his land in Stoke Mandeville, now part of the town of Aylesbury). The photograph is one I took of his statue in the centre of Aylesbury.

Who's honoured at Westminster
Constitutional Meat
The Ship Money Case

Hampden is commemorated in America by the naming of the towns of Hampden in Maryland, Connecticut and Maine - and the County of hampden in Massachusetts.