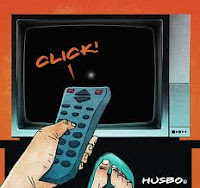 Want something good to read today if you aren't spending the day watching the TV? (As in 1982, I will be absenting myself from the couch in front of the television or any of the street parties - sadly an attempt to have a non Royal-LoveFest proposed by the Group "Republic" was banned)

My suggestion is Thomas Paine's excellent "Common Sense". It was written in 1776. The full text can be found here - but this is a taster -

"Government by kings was first introduced into the world by the Heathens, from whom the children of Israel copied the custom. It was the most prosperous invention the Devil ever set on foot for the promotion of idolatry. The Heathens paid divine honors to their deceased kings, and the christian world hath improved on the plan by doing the same to their living ones. How impious is the title of sacred majesty applied to a worm, who in the midst of his splendor is crumbling into dust!

As the exalting one man so greatly above the rest cannot be justified on the equal rights of nature, so neither can it be defended on the authority of scripture; for the will of the Almighty, as declared by Gideon and the prophet Samuel, expressly disapproves of government by kings. All anti-monarchical parts of scripture have been very smoothly glossed over in monarchical governments, but they undoubtedly merit the attention of countries which have their governments yet to form. "Render unto Cæsar the things which are Cæsar's" is the scripture doctrine of courts, yet it is no support of monarchical government, for the Jews at that time were without a king, and in a state of vassalage to the Romans.

Near three thousand years passed away from the Mosaic account of the creation, till the Jews under a national delusion requested a king. Till then their form of government (except in extraordinary cases, where the Almighty interposed) was a kind of republic administered by a judge and the elders of the tribes. Kings they had none, and it was held sinful to acknowledge any being under that title but the Lord of Hosts. And when a man seriously reflects on the idolatrous homage which is paid to the persons of Kings, he need not wonder, that the Almighty ever jealous of his honor, should disapprove of a form of government which so impiously invades the prerogative of heaven.

Monarchy is ranked in scripture as one of the sins of the Jews, for which a curse in reserve is denounced against them. The history of that transaction is worth attending to.


The children of Israel being oppressed by the Midianites, Gideon marched against them with a small army, and victory, thro' the divine interposition, decided in his favour. The Jews elate with success, and attributing it to the generalship of Gideon, proposed making him a king, saying, Rule thou over us, thou and thy son and thy son's son. Here was temptation in its fullest extent; not a kingdom only, but an hereditary one, but Gideon in the piety of his soul replied, I will not rule over you, neither shall my son rule over you. THE LORD SHALL RULE OVER YOU. Words need not be more explicit; Gideon doth not decline the honor, but denieth their right to give it; neither doth he compliment them with invented declarations of his thanks, but in the positive stile of a prophet charges them with disaffection to their proper Sovereign, the King of heaven.


To the evil of monarchy we have added that of hereditary succession; and as the first is a degradation and lessening of ourselves, so the second, claimed as a matter of right, is an insult and an imposition on posterity. For all men being originally equals, no one by birth could have a right to set up his own family in perpetual preference to all others for ever, and though himself might deserve some decent degree of honors of his cotemporaries, yet his descendants might be far too unworthy to inherit them. One of the strongest natural proofs of the folly of hereditary right in kings, is, that nature disapproves it, otherwise, she would not so frequently turn it into ridicule by giving mankind an ass for a lion.