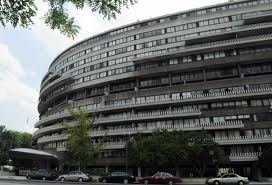 “Watergate” is not just the name of a scandal that brought about the only Presidential resignation in US history, but is an iconic building in Washington DC. I used to stop close to the Watergate (not in, out of my price range!) during my early visits to the city. It isn’t a single building, but a complex of five buildings., covering a site of 10 acres. There is a hotel as well as apartments and offices. There used to be a Safeway supermarket (where I discovered ‘Red Rose Tea’), but that closed a few months ago. It was built in the 1960s, final completion coming only in 1971.

But it was the early hours of June 17th 1972 that made it a household name around the world. The Democratic National Committee had its headquarters on the sixth floor of the Hotel and Office Building (the 2600 Virginia Avenue building) . The famous break in that occurred 40 years ago this weekend was not the only one. In fact it took place because one of the original bugs, placed on May 28th, was not working properly. There is a fascinating 20 page article on the earlier burglary, which seeks to bring together the evidence about what happened where and when at http://en.wikipedia.org/wiki/Watergate_burglaries

The famous burglary was monitored from the Howard Johnson Hotel across Virginia Avenue. It is now student accommodation. The burglars were arrested after a security guard, Frank Wills, found that duct tape had been left on the door between the garage and a stairwell. (He played himself in the film "All the President's Men")  The door can now be seen in the Newseum. And as they say, the rest is history…..
Posted by J David Morgan at 05:30