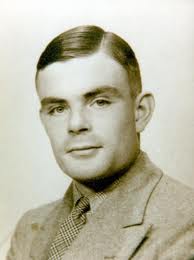 This Saturday will be the centenary of the birth of Alan Turing. His significance (for Mathematics; Computing and the winning of World War II) is great - and has been internationally recognised in recent years. (President Obama has often mentioned him).
...and most days he cycled through Furzton (where I now live) on his way to Bletchley Park. Between 4 September 1939 and the summer of 1944, he lodged at The Crown Inn, at Shenley Brook End (It is now a private home). Ronald Lewin has written

"in the first week of June each year he would get a bad attack of hay fever, and he would cycle to the office wearing a service gas mask to keep the pollen off. His bicycle had a fault: the chain would come off at regular intervals. Instead of having it mended he would count the number of times the pedals went round and would get off the bicycle in time to adjust the chain by hand." He is also reputed to have "occasionally ran the 40 miles to London when he was needed for high-level meetings" (he was a talented long distance runner - he also qualified for the 1948 Olympics!).

The most intriguing story is of his silver bars. "In 1940 he buried some silver bars near Shenley. In 1944, 1946 and 1952 he tried to find them and failed. No-one knows what happened to his buried treasure!" As the Shenley Road runs through Furzton - it might be that the silver bars still lie within Furzton! Perhaps another reason why (when the ground has stopped being waterlogged) I should be digging in my back garden.

(for an earlier post - and video on Bletchley Park go to http://washminster.blogspot.co.uk/2009/11/special-relationship.html)
Posted by J David Morgan at 05:15