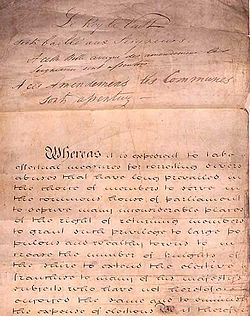 Today is the 180th anniversary (Triple Diamond? 3 * 60) of the Great Reform Act 1832 being signed into law. It was a significant step towards the establishment of a democracy (though it was another 86 years before half the adult population got the vote – and another 11 years before equality in voting rights was achieved).

The Prime Minister who brought about this first widening of the franchise was Earl Grey (yes, it was named after him!).

In 1832, Parliament passed a law changing the British electoral system. It was known as the Great Reform Act. This was a response to many years of people criticising the electoral system as unfair. For example, there were constituencies with only a handful of voters that elected two MPs to Parliament. In these rotten boroughs, with few voters and no secret ballot, it was easy for candidates to buy votes. Yet towns like Manchester that had grown during the previous 80 years had no MPs to represent them.

In 1831, the House of Commons passed a Reform Bill, but the House of Lords, dominated by Tories, defeated it. There followed riots and serious disturbances in London, Birmingham, Derby, Nottingham, Leicester, Yeovil, Sherborne, Exeter and Bristol. The riots in Bristol were some of the worst seen in England in the 19th century. They began when Sir Charles Weatherall, who was opposed to the Reform Bill, came to open the Assize Court. Public buildings and houses were set on fire, there was more than £300,000 of damage and twelve people died. Of 102 people arrested and tried, 31 were sentenced to death. Lieutenant-Colonel Brereton, the commander of the army in Bristol, was court-martialed.

There was a fear in government that unless there was some reform there might be a revolution instead. They looked to the July 1830 revolution in France, which overthrew King Charles X and replaced him with the more moderate King Louis-Philippe who agreed to a constitutional monarchy.

In Britain, King William IV lost popularity for standing in the way of reform. Eventually he agreed to create new Whig peers, and when the House of Lords heard this, they agreed to pass the Reform Act. Rotten boroughs were removed and the new towns given the right to elect MPs, although constituencies were still of uneven size. However, only men who owned property worth at least £10 could vote, which cut out most of the working classes, and only men who could afford to pay to stand for election could be MPs. This reform did not go far enough to silence all protest.
Posted by J David Morgan at 05:30