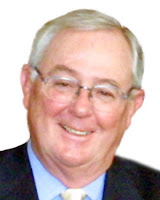 If you visit the website of the OSCE Parliamentary Assembly, you will see that the Secretary General is R Spencer Oliver, and that he has been in post since 1992. His biography though doesn't give the reason why he is the subject of this post, which is part of a series on a 40th anniversary which occurs this coming Sunday.

In 1972 Mr Oliver was the Executive Director of Association of Democratic State Chairmen. He worked in the offices of the DNC in the Watergate Building. His phone had a bug placed on it. The other bug was placed on the phone of the DNC Chairman, Larry O’Brien.

Oliver started a lawsuit against those who had bugged his phone. The new Chair of the DNC tried to persuade him to drop the lawsuit, even cutting off his salary to force his hand. I found this interesting article online -


“In an interview with Robert Parry, the author of Secrecy & Privilege: Rise of the Bush Dynasty from Watergate to Iraq (2004) Oliver suggested that the wiretap was connected to his attempts to head off the nomination of George McGovern. Oliver was concerned that McGovern would be easily defeated by Richard Nixon in the 1972 presidential election. He was therefore involved in a plot to replace McGovern with Terry Sanford.


Oliver believes that Nixon wanted to gain information about his plans so that he could undermine the plot to stop McGovern's candidacy. According to Oliver, John Connally and Robert Strauss, were using their influence behind the scenes to get McGovern the nomination. He points out that McGovern got his share of the Texas delegates on 14th June, 1972. Later that day, Gordon Liddy told the burglars that they needed to return to the Democratic offices at Watergate. Three days later, James W. McCord, Frank Sturgis, Virgilio Gonzalez, Eugenio Martinez and Bernard L. Barker were arrested while breaking into the Watergate offices. Does this mean that the purpose of the second break-in was to remove the bug from Oliver's phone?


Spencer Oliver was convinced that the full story was not being revealed about Watergate. He therefore started a lawsuit against those involved in placing a wiretap on his phone. As he pointed out: "I realized that anybody who received the contents of the intercepted telephone conversation and passed them on, in other words, the fruits of the criminal act, was also guilty of a felony. So that meant that if someone listened to my phone, wrote a memo like McCord had done and sent it to the White House or to CREEP, everybody who got those memos and either read them or passed them on was a felon."


Robert Strauss, who was now Chairman of the Democratic National Committee, tried to persuade Oliver to drop the lawsuit. When he refused, Strauss cut off his pay as executive director of the Association of State Democratic Chairmen. Strauss also worked behind the scenes in order to arrange a negotiated settlement with the Republican Party.


At a press conference in April, 1973, Oliver declared: "I am appalled at the idea of ending the civil suit in the Watergate case through a secretly negotiated settlement and thereby destroying what may be an important forum through which the truth about those responsible may become known. I do not know what motivated Robert Strauss to even contemplate such a step."


Robert Parry (Secrecy & Privilege: Rise of the Bush Dynasty from Watergate to Iraq) has pointed out that "Oliver said it was not until spring 1973 that he began putting the pieces of the Watergate mystery together, leading him to believe that the events around the Texas convention were not simply coincidental but rather the consequence of Republican eavesdropping on his telephone. If that was true, Oliver suspected, Strauss may have been collaborating with his old mentor Connally both in arranging a Texas outcome that would ensure McGovern's nomination and later in trying to head off the Watergate civil lawsuit."”

In 1976 Spencer Oliver was appointed as Chief Counsel of the Foreign Affairs Committee of the US House of Representatives and during the Iran-Contra Scandal he instigated an investigation of CIA Director, William Casey.
A few years ago, I had to ring Mr Oliver, as we were talking the thought did pop into my head, “I hope nobody’s listening in to our conversation.”
Posted by J David Morgan at 05:30