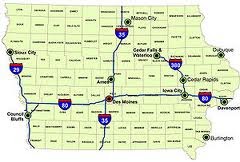 The world's attention will of course be focused on Iowa today - as the caucuses are held - the first time that real voters get to make their choices known for the Presidential election. While interest is centered on the Republican caucus - there are also similar meetings for Democratic supporters. President Obama is hot favourite there! As the polls suggest - the result of the Republican caucus is less clear cut.

As I wrote four years ago -

Party supporters will meet across the state to select their nominees for the candidacy of their party. Party meetings are held in each Precinct (the equivalent of a ward in the UK). These may be in 'public' buildings such as schools, public libraries or churches - or may be in a particular person's home. Each precinct contributes towards the county convention, of which there are 99. These county conventions then select delegates for both Iowa's Congressional District Convention and the State Convention—these eventually choosing the delegates for the National Convention.


The process for selecting nominees differs in each party. The registered Republicans who turn up for their meeting listen to arguments for candidates put forward by other caucus participants then write the name of their chosen candidate on a previously blank piece of paper - voting by secret ballot. The results are then sent to the Iowa Republican Party who release the final totals.

The Democratic caucus this time will focus more on preparing for the final stages of the Presidential race (which of course, with an incumbent President facing no serious challenger from within his party, starts now).

But Washminster's interest in Iowa will not end tonight. During 2012 I will be paying special attention to 15 states where there are wider electoral interests. Some will be key states which could tip the Presidential race either way. Others have a number of key House or Senate races. Iowa is one of those states. It has 6 Electoral College Votes for the Presidential - and is currently regarded as a toss up. All four of its House races are regarded as competitive. The redistricting following the census leaves Iowa with one less seat.

Districts 1 (Bruce Braley D) and 2 (Dave Loebsack) are regarded as 'likely Democratic'; 3 (a merged seat is 'toss up' Leonard Boswell D, the member for the current 3rd district will face Tom Latham R, the Member for the current 4th district) and 4 is 'lean Republican' (Steve King R). [Cook's Political Report 28th December]. Rothenberg concurs over IA03, but regards the other seats as safer than Cook does.

As with the other states that Washminster will be following (and a few additional House and Senate races) - we'll be looking at the candidates and the issues in more detail as the campaign progresses.
Posted by J David Morgan at 09:39