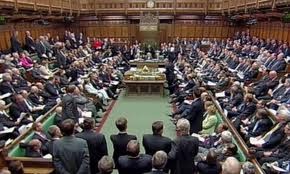 I often hear this comment - not only on the doorsteps when out canvassing; but from students. Of course I disagree (it would have been difficult to be me - and to have done the things I've done, if I hadn't discovered a fascination for politics!!). Yes it can be tedious, and sometimes depressing - Yes, it can be a challenge to keep up with developments or understand all the issues that arise - but it is no accident that politics has proved such a rich source for novelists & playwrights.

It can provide first class entertainment - but more seriously, as citizens, it is about how we shape the world around us. In a democracy - we have both the privilege and DUTY of choosing our own leaders.

Lord Acton wrote (and I make no apology for repeating what I have quoted in numerous blogs; lectures; tutorials and speeches) - "Power tends to corrupt, Absolute Power corrupts absolutely".

The role of legislatures in particular, is to hold those who exercise power, to account. MPs can question Ministers about their policies and actions in the daily question time. [PMQs - Prime Minister's questions are just one half hour on a Wednesday, the first hour of business in the Commons on Mondays through Thursdays is set aside for oral questions. The House of Lords has a 30 minute Question Time]. Select Committees can conduct detailed inquiries. The Public Accounts Committee is charged with examining "the accounts showing the appropriation of the sums granted to Parliament to meet the public expenditure, and of such other accounts laid before Parliament as the Committee may think fit"  - their website is accessible here.
The US Congress is given extensive powers.

Many decry the amount of argument in Parliament or Congress - but this is central to their purpose. Many different opinions are held within a nation. Parliament and Congress are the forum for the differing ideas and solutions to problems to be discussed. While Athens was small enough to allow direct democracy (and the telecommunications revolution opens up new opportunities today and in the future), Representative Democracy will have to do. [ Churchill - "Democracy is the worst form of government, except for all those other forms that have been tried from time to time"].

Do you know how to get your voice heard?, or how to make your representative work for you? - a challenge for 2012 is to empower more people to use the democratic powers they should enjoy.
Posted by J David Morgan at 05:08