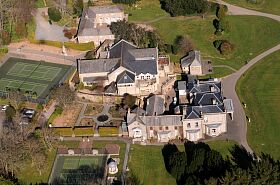 I spent the last two weeks of 2011 in Clowance, Cornwall - a welcome break after a busy year - and a chance to recharge the batteries for a very exciting & busy 2012. But even in the remote location we were based in, there were links to Parliament (No, I didn't spend the two weeks reading old copies of Hansard - actually that's not entirely true - one evening I spent reading on the archive site speeches and questions relating to Milton Keynes - on Saturday how I wished that the proposed route from Swindon to Milton Keynes to the East Coast ports had actually come to fruition!! - and the history of the Open University).

Our "apartment" was in the old coach house next to the main house at Clowance. (hyperlinks take you to the National Heritage List for England - and the relevant entries). Clowance was the home of the St Aubyn family. From April 1554, when William St Aubyn was returned for Helston (a town we visited a couple of times during the holiday) until Sir John Aubyn, Liberal Unionist MP for St Ives (a town we spent even more time in) was made Lord St Levan in 1887 - the family has had MPs in most parliaments. In my post of 9th December 2008 (we spent the week before Christmas in Clowance that year), I described one of these MPs Sir John Aubyn who  has his own little place in history. While Lord St Levan was a Liberal most of his ancestors were Tories. The 3rd Baronet (profiled in my 2008 post) has been described as "an extreme Tory" and "one of the Tory leaders in the House of Commons under George II". Colonel John St Aubyn (MP Tregony April 1640; Cornwall 1656; St Ives 1659 and 1660) sided with the Parliamentarians in the Civil War, but in 1659 called for a free Parliament and served in the Convention Parliament of 1660.

It is possible now to access "The History of Parliament" via the internet. While some parts remain to be published - it is possible (yes, I was that sad on holiday) to research constituencies and members - or even families of MPs.

The coach house is at the top of the picture - the main house at the bottom right. Between the two is the leisure complex.
Posted by J David Morgan at 05:05