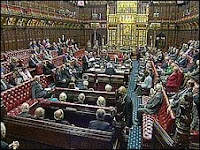 I spent many hours yesterday watching proceedings in the House of Lords from the public gallery. Before we were admitted the Lord Speaker's Ceremony took place where she was escorted from her rooms at the southern end of the Palace through Princes' Chamber; along the "Not Content" Lobby (Votes are taken in what is normally a corridor) into the Peers Lobby and finally into the Chamber where she took her seat. Visitors were then escorted from the Peers Lobby upstairs - but we were not admitted until prayers had been completed. In the Westminster Parliament, only Members and certain officials are allowed in while prayers are in progress. Finally we were allowed into the gallery - and Question Time began.

In the Commons questions are directed at Ministers from a specific Government Department. In the Lords they are to "the Government". Thirty minutes are set aside for oral questions. Four Members get to put a question which has been submitted in advance. The Minister's initial reply must be in less than 75 words. Then supplementaries begin - first from the person who had put down the initial question - then from others. After seven or eight minutes (or less if there are no further Peers wishing to ask a supplementary) the next question is taken.

There was a small amount to business to be dealt with before the big debate of the day began. Yesterday it was the Second Reading of the Legal Aid; Sentencing and Punishment of Offenders Bill. My post of last Wednesday has the background to this controversial bill.

It is well worth watching or reading the debate - particularly if you are a law student - but also if you are a citizen. There are many important issues involved - and at its heart, the importance of the ability to enforce rights. Magna Carta was quoted (and in the chamber statues of the Barons who forced King John to sign that groundbreaking document, look down upon proceedings). Many references were made to Lord Bingham's excellent book - "The Rule of Law".

The committee stage of the Bill will start soon - and I'll be reporting from it for Washminster.
Posted by J David Morgan at 06:07