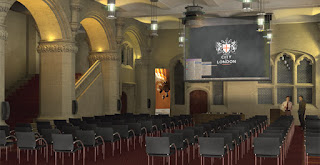 Last Thursday I attended a "Parliament Week" event at the Guildhall. It was addressed by the Speaker of the House of Commons, John Bercow. Further speeches were made by Lord Hennessy of Nympsfield (Peter Hennessy, the historian); Lord Desai (Meghnad Desai, Economist) and Michael Cockerell (Journalist and Documentary Maker - The Great Offices of State; The Secret World of Whitehall).

Questions were taken (mine is at 59 mins 50 secs to 1 hr 00 mins 25 secs - I was deliberately provocative - but the point remains, the Lords is very limited in its ability to effectively challenge the Government of the Day).