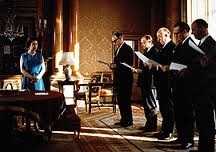 I've recently been asked questions, to which the answer is "Privy Counsellors". (see the post on 5th November - "who is entitled to sit on the steps of the Throne in the House of Lords?"; and the other question is "who is referred to as as "Right Honourable?").

So what is a Privy Councillor? The immediate answer is "a member of the Privy Council". Senior Ministers (and often senior backbenchers - such as long standing Chairs of select committees) are given membership. There is also the Judicial Committee of the Privy Council which is the court of final appeal for the UK overseas territories and Crown dependencies, and for those Commonwealth countries that have retained the appeal to Her Majesty in Council or, in the case of Republics, to the Judicial Committee.


There is an excellent description of the Privy Council; its history and its membership at http://privycouncil.independent.gov.uk/privy-council/privy-council-members/
Posted by J David Morgan at 05:03