The Steps of the Throne 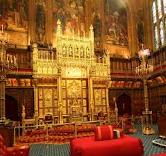 If you watch broadcasts of the House of Lords - you may see individuals sitting on the steps of the throne. Often these are Peers who wish to listen to a debate - but don't want to participate (Technically the steps are not part of the House for the purposes of proceedings).

· members of the House of Lords in receipt of a writ of summons, including those who have not taken their seat or the oath and those who have leave of absence;

· members of the House of Lords who are disqualified from sitting or voting in the House as Members of the European Parliament or as holders of disqualifying judicial office;

· hereditary peers who were formerly members of the House and who were excluded from the House by the House of Lords Act 1999;

· the eldest child (which includes an adopted child) of a member of the House (or the eldest son where the right was exercised before 27 March 2000);

· diocesan bishops of the Church of England who do not yet have seats in the House of Lords;

· retired bishops who have had seats in the House of Lords;

· Clerk of the Crown in Chancery;

· Black Rod and his Deputy;

· the Dean of Westminster.
Posted by J David Morgan at 05:06