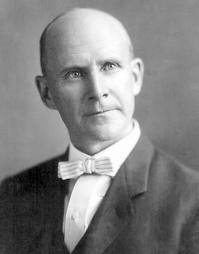 This week I've been listening to the C-SPAN podcasts of their series "The Presidential Contenders". One character that particularly interested me was Eugene V Debs - who ran for the presidency as a third party candidate in 1900, 1904, 1908, 1912 & 1920. The programme makes the point that though he didn't succeed at the polls, he was a major influence on US politics - and in bringing issues to the forefront of public debate.

The Eugene V Debs Foundation has an extensive website at http://debsfoundation.org/, which has some interesting background and details of books about him.

On another website there are a collection of quotes from him - these include:

"The issue is Socialism versus Capitalism. I am for Socialism because I am for humanity. We have been cursed with the reign of gold long enough. Money constitutes no proper basis of civilization. The time has come to regenerate society — we are on the eve of universal change."

"Ignorance alone stands in the way of socialist success. The capitalist parties understand this and use their resources to prevent the workers from seeing the light.Intellectual darkness is essential to industrial slavery."

The Video can be watched at http://www.c-spanvideo.org/program/DebsP .
Posted by J David Morgan at 05:15