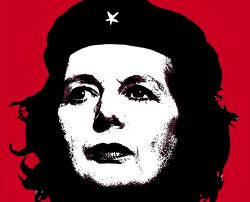 Personally, one of my favourite speeches is that made by Tony Blair in 1999 - the so called "forces of conservatism" speech, in which he said:

"For the 21st century will not be about the battle between capitalism and socialism but between the forces of progress and the forces of conservatism.

They are what hold our nation back. Not just in the Conservative Party but within us, within our nation.

The forces that do not understand that creating a new Britain of true equality is no more a betrayal of Britain's history than New Labour is of Labour's values.

The old prejudices, where foreign means bad.
Where multi-culturalism is not something to celebrate, but a left-wing conspiracy to destroy their way of life. Where women shouldn't work and those who do are responsible for the breakdown of the family.
The old elites, establishments that have run our professions and our country too long. Who have kept women and black and Asian talent out of our top jobs and senior parts of Government and the Services. Who keep our bright inner city kids from our best universities. And who still think the House of Lords should be run by hereditary peers in the interests of the Tory Party.

The old order, those forces of conservatism, for all their language about promoting the individual, and freedom and liberty, they held people back. They kept people down. They stunted people's potential. Year after year. Decade after decade."

So what explains the strength of "conservative" ideology? - and neither I, nor Blair, mean it in the narrow sense of the British Conservative Party. It was rampant in the Russian Communist Party, in some Trade Unions - and in organsations who called themselves progressive. It's a mindset which seeks to protect what existed in the same - at, some argue, the expense of the future.

C-SPAN recently broadcast a very interesting programme in which Corey Robin discusses the nature and history of conservatism. It's a thought provoking programme - I've already listened to it twice. Please do send me YOUR comments (jdavidmorgan@googlemail.com)

The broadcast can be watched here.
Posted by J David Morgan at 05:10