Rights aren't much use if the means do not exist to enforce them. That underlies the opposition to the recent Legal Aid "reforms" (if you haven't done so already, it's worth looking at the four videos I posted on Friday - starting here.)

When the treaties which began the development leading to today's European Union were signed, some member states expected that rights for individuals arising in EU law would only be enforceable in the traditional way - by Member States or Institutions taking action against failures by other states or the institutions themselves. They would be the only ones who could stand up for the rights of individual citizens.

But the European Court of Justice developed the concept of "Direct Effect" - which means that, if certain criteria are met, an individual can enforce their right in a NATIONAL Court.

The breakthrough case was "van Gend en Loos v Netherlands Inland Revenue Administration". It's one of the key EU law cases - and every Law student should read it to follow the Court's reasoning  - it's available to read here.

There are other ways to enforce rights if there is no Direct Effect - these are "Indirect Effect" and "State Liability".

The following diagram sets out a logical approach to considering how an individual might enforce a right arising in European Law. (A frequently occurring question in exams). First consider whether there might be direct effect; if there is not, or may not, be direct effect then consider if indirect effect may provide the remedy. If neither of these can help, then the State should be sued under State Liability. Direct and Indirect Effect actions must be brought against the body whose action has immediately affected the individual (The employer; the company...)

Click on the picture to see the full sized version (works on some computers) or click on picture and print). I've highlighted in red the matters which would require detailed discussion - so make sure you are confident in using the relevant case law. 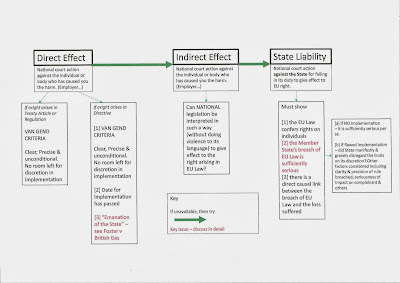