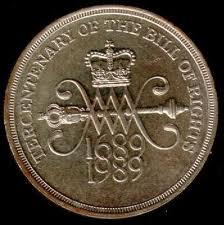 A century before the American and French revolutions that will be celebrated this month, we in Britain had our own - very British - revolution. To paraphrase - James II got too big for his boots and tried, like his father, to push Parliament around. He was run out of town. William and Mary were invited to become the new monarchs - but with strictly limited powers. If there had been any doubt before, it was expressly resolved - that the Sovereign [the ultimate source of power within the State] was no longer the monarch, but Parliament.

The "Bill of Rights" 1689 is not a charter of individual rights (as the first 10 amendments to the US Constitution are), but a clear statement of the rights of Parliament. Like the Magna Carta, it is an important statute within UK Constitutional Law.

It can be read here and its significance explained here.
Posted by J David Morgan at 05:30