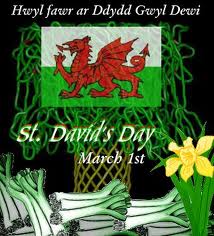 As a Welshman (well to be strictly correct, of Welsh ancestry - I was born in a part of Coventry - which at the time was in the district of Meridan - which is the geographic centre of England), I will today be celebrating the Welsh national day. St David was a welshman (note to my English & Scottish friends - it's a good idea to have as your patron saint someone from the country! St Andrew was from Palestine and St George - if he ever existed! - would have been Turkish), born in the late fifth or early sixth century. He was both the founder of many churches, (including the 'bed-hus' or chapel, which he is said to have founded in the village of "Betws" where my mother's family come from.) and an able administrator.

A webpage about St David can be found here.

If you are thinking about visiting Wales - the Tourist Board's website is here.

There is a book about the 150 most famous Welsh Americans.