Local Courts in the USA 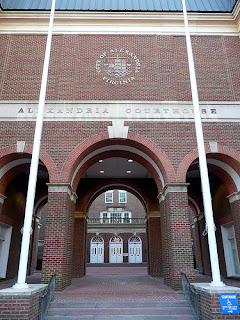 In England and Wales we have a single legal system - which has criminal and civil aspects. In the United States the state legal system (for example that of Virginia, Maryland, Wisconsin or California) exists alongside the Federal legal system.

"The circuit court is the trial court of general jurisdiction in Virginia; this means that the court has authority to try a full range of cases both civil and criminal. Civil cases involve disputes essentially private in nature between two or more parties; criminal cases are controversies between the State and persons accused of a crime. Only in a circuit court is a jury provided for the trial of these disputes and controversies."
A diagram of the Virginia State Court structure is accessible here.

"The United States district courts are the trial courts of the federal court system. Within limits set by Congress and the Constitution, the district courts have jurisdiction to hear nearly all categories of federal cases, including both civil and criminal matters. Every day hundreds of people across the nation are selected for jury duty and help decide some of these cases.

There are 94 federal judicial districts, including at least one district in each state, the District of Columbia and Puerto Rico. Three territories of the United States -- the Virgin Islands, Guam, and the Northern Mariana Islands -- have district courts that hear federal cases, including bankruptcy cases."

A diagram of the structure is available here.

So in Alexandria, Virginia you will find