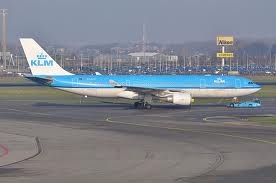 What route does the plane take from Heathrow to Washington? - (or my favourite routes Birmingham to Amsterdam and Amsterdam to Washington?). Where are the planes in flight between Wahington and the UK?

I have an iPhone App , which is also available on the internet here, which allows me to follow many flights. I used it before I flew to Washington in January to track the flights I would be taking. I was able to alert my wife that on the morning of the first leg (from Birmingham to Amsterdam), I would be be flying over the village she was teaching in that morning - so she would be able to watch out for me (sadly defeated by (1) the very heavy cloud and (2) the plane was a couple of minutes earlier than expected).

The programmes cover most of the world (though not mid-ocean). Have fun.
Posted by J David Morgan at 05:49